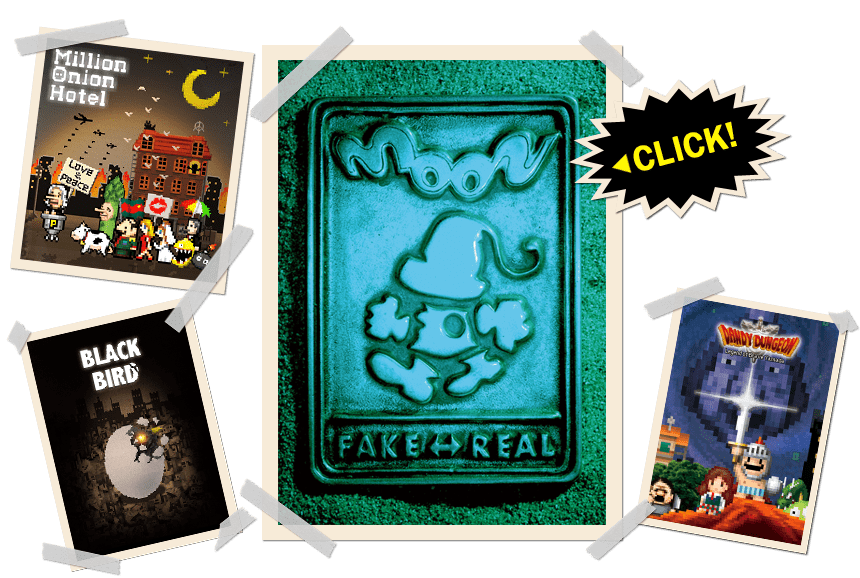 Get MOON Wallpapers for your PC or mobile phone!

We’re just days away from moon coming to Nintendo Switch in Japan! Anticipation is at a fever pitch!

While work continues on the translation to bring moon to the West for the very first time, we’re celebrating this landmark release by putting out a series of wallpapers for Windows, Mac and mobile phone!

You can find links to all the wallpapers on the official Japanese moon site, where you can also peek at the digital manual for the Switch version of the game!

If you’re using the wallpaper, you should tweet us at @oniongames and show us how nice they look in the wild!

You can also come join us in the official Onion Games Discord to talk about the return of moon and all our other games by clicking right here!

MOON is coming to Nintendo Switch… in English!

Finally, it can be told! As you might have seen in Japan’s latest Nintendo Direct, the cult-hit “remix RPG adventure” moon is coming to the Nintendo Switch! The game is available for pre-order in Japan right now, and, very soon, the game will be available to the rest of the world, finally in English for the very first time!

Never heard of moon and don’t know why it’s inspired so many of your favorite adventure games? Read on to learn more…

A long, long time ago, under the silvery light of a full moon, the legendary “anti-RPG” moon was released in Japan.

Now, 22 years later, revived by a team of its original creators, find out why it became an instant cult-classic, as moon comes to the Nintendo Switch — in English, for the first time ever!

Have you ever played an RPG and wondered…

“Why is it OK that this hero is breaking into houses and stealing items from people’s drawers??”

“Why is it OK that this hero is killing thousands of innocent monsters??”

Moon is a game about turning those tropes upside down, and seeing what really happens behind the scenes of your favorite RPG videogames.

[THE STORY OF MOON]

One night, under the silvery light of a full moon, a young boy is suddenly sucked through his TV and into a videogame — a classic JRPG called “Moon World”.

Following closely behind the game’s brave hero, the boy begins his own journey to recover the world’s missing moonlight by collecting “Love”.

As Moon World’s hero loots and levels up by cutting down monsters for experience points — you know, as heroes do — the boy releases their souls and collects their “Love”.

Moon is not a game where you’ll fight to level up — your own progress comes by gathering lost “Love”!

As you explore the world, you’ll meet a crazy cast of weird and wonderful NPCs. Observe their strange habits and daily routines by visiting them at different times and days of the week, and learn their secrets to uncover even more lost “Love”!

“Now… use your own power to open the door…”

• Conquer a game with a clear conscience in this Zero-Battle RPG! Free monsters’ souls!

Come join us in the official Onion Games Discord to talk about the return of moon and all our other games by clicking right here!

We’ll have much more to say about moon in the near future — we hope you’re as excited as we are to bring the game to the rest of the world for the first time in English, and help find many new moon fans!

It’s a Summertime Bonanza! Everything is On Sale!

It’s getting so hot out… this is the perfect time to stay inside all day and play videogames!

From August 8th until August 21st, everything at Onion Games is on sale from 10% to a full 50% off! Literally everything! You can see a big list of all our discounts right over here, or read on for the breakdown!

END_OF_DOCUMENT_TOKEN_TO_BE_REPLACED

Dandy Dungeon Reviews Are In! And… You Love Us!

We feel…. seen! Dandy Dungeon ~Legend of Brave Yamada~ is officially released worldwide, and the reviews have been great! Here’s what you’ve had to say so far!

Kotaku UK: “There aren’t many games that deliver aesthetics and personality quite like this. Yamada is a reflection of his creators as well as the industry itself. His game, as you’ll hopefully discover, is quite brilliant.”

TouchArcade: “It’s funny, sentimental, weird, and a lot savvier than you’d first guess. It’s also a really fun game with a core mechanic you won’t find in any other Switch RPG… Don’t miss it… 5/5“!

GameReactor: “The more we played Dandy Dungeon and the more layers were introduced, the more captivated we became by its simple yet effective mix of RPG progession and roguelike dungeons… 9/10“!

NintendoLife: “The light-hearted take on one man’s inability to separate reality from fantasy really works as a great conceit for the overall game, while the puzzle-like approach to combat and exploration makes the now rather tired world of roguelites feel instantly more refreshing… 8/10“!

Destructoid: “I’ve put 20 hours into this game and I know I’ll put at least another 20 trying to earn every costume and weapon it has to offer. To me, Dandy Dungeon: The Legend of Brave Yamada is worth the time investment.”

Siliconera: “Where Dandy Dungeon shines is in its tongue-in-cheek story, presentation and localization. The game is the brainchild of Yoshiro Kimura, who’s known for his weird games like Little King’s Story, a charming game about a king who conquers the world, and it definitely shines through here.”

A fantastic deep-dive from the current #1 Yamada-kun in the world, Thane!

GameSpew: “It’s not your usual dungeon-crawling RPG… but Dandy Dungeon is a hell of a lot of fun. It’ll get its quirky little claws in you and refuse to let go… 8/10“!

GamingTrend: “Dandy Dungeon: Legend of Brave Yamada is a delightful little tongue-in-cheek RPG with a little heart and a lot of laughs. Its simple yet engrossing gameplay system mixed with fun puzzle mechanics and cute presentation make this a wonderful Switch title to play on the go… 80/100“!

A great, lengthy write-up from Everybody’s Talking At Once: “Dandy Dungeon is about love and labor and the worth of human creativity, and it explores those themes in about the silliest, grindiest, least portentous way possible.”

PS3Blog: “Dandy Dungeon: Legend of Brave Yamada is a must-have game on Nintendo Switch that offers a quirky story and set up that opens the door to some fun gameplay mechanics in this roguelite dungeon crawling experience… 8.5/10“!

The Sixth Axis: “It’s a delight and one that you’ll find yourself hooked on. Also, down with capitalism and billionaire CEOs… 8/10“!

Niche Gamer: “Dandy Dungeon is definitely an extremely unique game with a-one-of-a-kind experience that you can’t get anywhere else… 9/10“!

Player2: “While it may seem a touch simple at first glance, it’s a fairly deep and rewarding experience that is more than the sum of its parts thanks to the humour and passion it exudes throughout. I know I’ll be spending many more hours delving through dungeons with Yamada-kun.”

We love hearing what you think! Don’t forget you can always join us at our friendly and welcoming Discord server to talk about all the things you’ve discovered in your dungeon dives, and let us know how you’re enjoying the game!